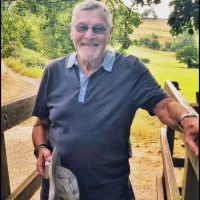 David was born on 16 July 1936 to Ethel and Owen Taylor in Aylesham, Kent. He is survived by his younger sister and brother, Judith and Keith and by his three daughters, Louise, Sue and Sarah, his sister in law, Betty and many other much loved family and friends.

Ethel and Owen moved back to South Yorkshire from Kent when David was a small child. He went to Slosh School in Tankersley and then to Kirk Balk Secondary School before studying Mechanical Engineering at Wombwell Technical College.

In 1954, he met his beloved late wife, Lorna. He was a talented and passionate photographer and took some beautiful photographs of Lorna in their early years, throughout their many years together and as their family grew. David and Lorna were a very stylish couple and loved dancing – Lorna making her own stunning dresses. They married in 1960 at Tankersley Church and after a few years as a young married couple and buying their first home at Ward Green, they went on to have three daughters, Louise, Sue and Sarah. He was a very much loved grandad to Nathan, Nicole and Jessica and great grandad to Owen, Liam, Nelson, Sadie and Olivia.

David, Lorna, Louise, Sue and Sarah moved to Australia in 1973, where they lived for three and a half years before returning to Tankersley in South Yorkshire and later settling in Derbyshire. David made many great friends during his lifetime – in Yorkshire, Australia and Derbyshire and while working as a mechanical engineer and later in his engineering sales role at Wellman Bibby. He travelled extensively across the country and to many countries in connection with his work, including South Africa, Egypt, Korea, and India and was well respected by everyone he came into contact with and whom he worked with.

David loved to travel, enjoying many holidays with Lorna to the Greek Islands, family holidays in England and further afield, including many recent adventures with Sue, Jessica and Wesley and visiting Louise, Malc, his grandchildren and great grandchildren and Sarah & Will in Australia.

Loved by many, but especially by Lorna, his girls, his grandchildren and great grandchildren, Judith, Keith and all his extended family, David will be greatly missed by them and all who had the pleasure of knowing him. A true gentleman who always made time for everyone and greeted them with his charismatic and heart warming smile and conversation.

Due to current restrictions, a private funeral service for family and invited guests will take place at All Saints Church, Matlock Bank at 11am on Wednesday, 9 December 2020 followed by interment at Darley Dale cemetery at 12 noon.

The funeral service and interment will be live streamed and recorded and may be viewed by clicking the link on this memorial page.

Donations in memory of David are being received for ‘The Chesterfield Royal Hospital Charity’ and may be sent to Thomas Greatorex & Sons Ltd, 29 Knowleston Place, Matlock, DE4 4BU.


This photo reminds me of one of the many happy times we spent with David and his best family. Suzy, Graham and I sat in wait for David to arrive in a pub in London. David didn’t know we were going to be there and I will never forget the surprise on his face when he walked in and saw us waiting for him. Memories like this are priceless and I am honoured to have very special memories of some fabulous times we spent together xx


Our last visit | August 2016
Submitted by: Louise and Malc Rhodes
–

I was so lucky to have met you and remember the times we spent together so fondly. Ali has posted a picture of the time we surprised you in London - your face was a picture! But this image also has such fond memories for me - it was one Sunday afternoon at your house with Lorna, Ali, Sarah and Sue - a few (very strong!) vodka and tonics later, we were all giggling away! Such happy memories.


This picture was taken in Leeds in November 2017 at one of the regular get-togethers of the now long retired members of the Bibby sales team. David was always good company when we met up to reminisce about the old times and often recalled his memories of customers, good and not so good, and also his overseas trips about which he shared many happy memories.

David was a good friend and well liked by customers and workmates alike. He was a good man and we feel lucky we got to know him and to work together

From the guys - Barry, Colin, John and Les


One of many happy memories of spending time exploring beautiful places with my wonderful, Dad. I will miss times like this Dad but treasure the time we spent together, the adventures we had and all the amazing memories created ❤️


Happy memories of the last time we visited you in Matlock. A very long walk along the canal to the pump house (which was a lot further than you remembered) That was a good day.

You taught me to be strong, independent, to work hard but make time to enjoy life and, above all, the people in our lives. to never give up, to always reach for the stars and to love with all my heart.

I love you and know you will always be close by. I still hear your words of encouragement cheering me on every day.

Love and miss you with all my heart ❤️

David You will be missed more than you can possibly know. I am truly thankful to have known you, when I think about it it’s roughly 35 years ! I have so many memories of you; sitting round your table with one or more of your beloved girls, your love of Neil Diamond, the way you loved to top my wine glass up despite my protests ! Also those fabulous concoctions you managed to dig out of your alcohol cupboard when the wine had gone ! There are really too many to mention. Thank you for always making me welcome… Read more »

Myself and my husband Adam have very fond memories of David and Lorna.. they were the perfect neighbours back in the 1990s .. kind.. considerate and helpful .. In later years and following our house move ,our friendship and chats continued .. It was hard to witness David’s heartbreak when Lorna passed away but they are reunited now in heaven .. David you were a charismatic gentleman that exuded warmth , kindness , humour, and a little bit of mischief .. you will be missed so very much by family and friends .. rest peacefully with Lorna my friend lynda… Read more »

Dad I have just had my first birthday without you, but you still contributed to-giving me a lovely last gift. I will miss you so very very much.
You have always been there to guide and support us all and we have such a strong and loving family thanks to you and mum.
I love you Dad x

Vanessa and Mike Breen From the day Mike and I met you and Lorna in Matlock, we felt welcome and part of your beautiful family. David, a gentleman, who truly expressed to anyone a kind and caring nature. When Louise and Malc emigrated to Australia, we were fortunate to share many more good times during your trips to Perth. One outing in particular that comes to mind is the rodeo in the “Hills”. So much fun had by all. This is a memory that holds a special place. We will always treasure the memories we shared. God bless David. May… Read more »

David, You were a great bloke, kind, thoughtful, generous, great fun to be with, and ageless, you mixed just as well with the young as you did those nearer to your own vintage. I always enjoyed meeting you and Lorna in one of the local pubs or at your house at Bank Road, and latterly around the luncheon table at the Coach House, or the Thorntree, and having a chat over a pint or two in the Duke. Today is a sad day when we gather together to say goodbye, and from the inspirational and heartfelt tributes, we see first… Read more »

Darling UD ….always a fun , positive person in my life . I have so many great memories of so many times together with you and AL. Some of the memories pop into my mind as I write this. Memories like me being your bridesmaid. Or you removing a bee sting from my arm sat on the tree seat . I remember ice cold glasses ( always) and lovely dinner parties. You taught me how to appreciate blue cheese and red wine ! Not only did you become my wedding photographer, you hosted our honeymoon. Two train rides also spring… Read more »

Reply
If you are the creator of this page, please login below to edit the information.

This memorial page is provided by Funeral Streaming Services, part of The Livestream Company and Vinco Group.

We use cookies to ensure that we give you the best experience on our website. If you continue to use this site we will assume that you are happy with it.OkPrivacy policy